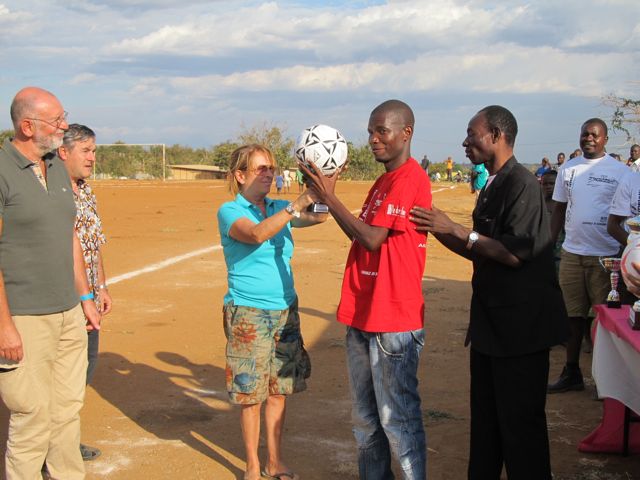 The day the trophy was launched

The curtain for the K1.5 million Andiamo League comes down this Sunday at Balaka stadium as former third tier side Andiamo Bullets face a rather resilient Super Rangers in a sink or swim affair. At stake is a K200 000 winner’s purse and glittering trophy.

The league, the only district league with highest sponsorship in the Southern region of Malawi, is sponsored by Balaka-based Andiamo Youth Cooperative Trust (AYCT) in conjunction with Association of Lawyers in Bergamo from Italy.

This promises to be a cracker looking at how both teams have fared in the qualifying rounds. On paper, Bullets are favourites but Rangers have sent stark warning that they will not be pushovers.

“We haven’t made special preparations for the game. But Bullets shouldn’t underrate us as we are there to show that we a team to reckon with in the district. Let me say it’s going to be a tough they [Bullets] should not expect an easy ride,” said Rangers’ coach Davie Mtambo.

Bullets’ striker Austin Kadzakumanja said they have made special preparations for this grand final.

“We are prepared to fight to the last drop of our blood to get the trophy. The morale in camp is high and the coming back of other three key players who missed some qualifying games gives us confidence,” said Kadzakumanja.

To wing into the finals, Bullets beat Balaka Socials 1-0 whereas Rangers trashed their erstwhile rivals Liwonde Roadblock 4-0. Socials and Roadblock will curtain-raise the final act to fight for the third position.

Runners-up and third place team will cart home K150 000 and K70 000 plus miniatures respectively. The fourth-placed team will get K50 000 whereas the most improved team will receive K20 000.

This year the league attracted 74 teams from across the district.

This entry was posted in Culture and Sport, News from Malawi and tagged Andiamo Bullets, Andiamo Trophy, Andiamo Youth Cooperative Trust, Association of Lawyers from Bergamo. Bookmark the permalink.